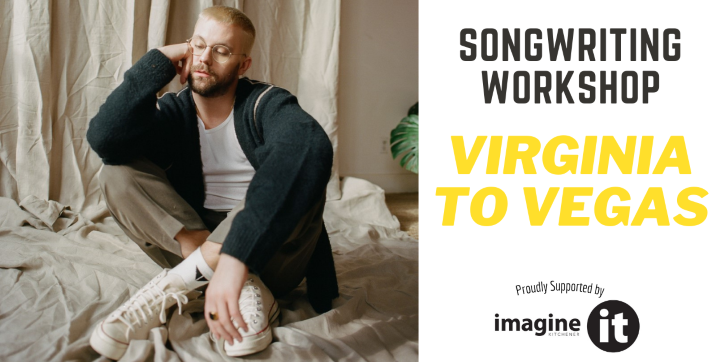 This is an online workshop offered via Zoom Webinar - please register here
Learn to tell your story in a song with Virginia to Vegas, aka Derik Baker. In this interactive workshop, Derik will share his creative process, what inspires him, and how he turns ideas and life experiences into lyrics and music with universal appeal.
Bio
Derik Baker known as Virginia To Vegas, is an American-born Canadian singer and songwriter. Raised in Guelph, he now resides in Toronto.
Songs you’ve heard on radio stations and streaming services include, his gold and platinum-certified singles, We Are Stars (ft Alyssa Reid), Lights Out, Selfish and Just Friends.
His most recent singles written and released during the pandemic include Just as Much (with Delaney Jane), Betterman, and Malibu. He has previously performed on stage at events that included Backstreet Boys, Post Malone and Pitbull.
Virginia to Vegas is 4X platinum, Juno nominated, as well as Canadian Radio Music Awards Heatseeker Award. Baker's 2019 summer hit, Just Friends saw Virginia to Vegas reach new heights, garnering a top 3 chart position at Canadian radio, while his single Betterman marked the fifth top 10 single of his career.