85 Queen: Praying to the West: How Muslims Shaped the Americas 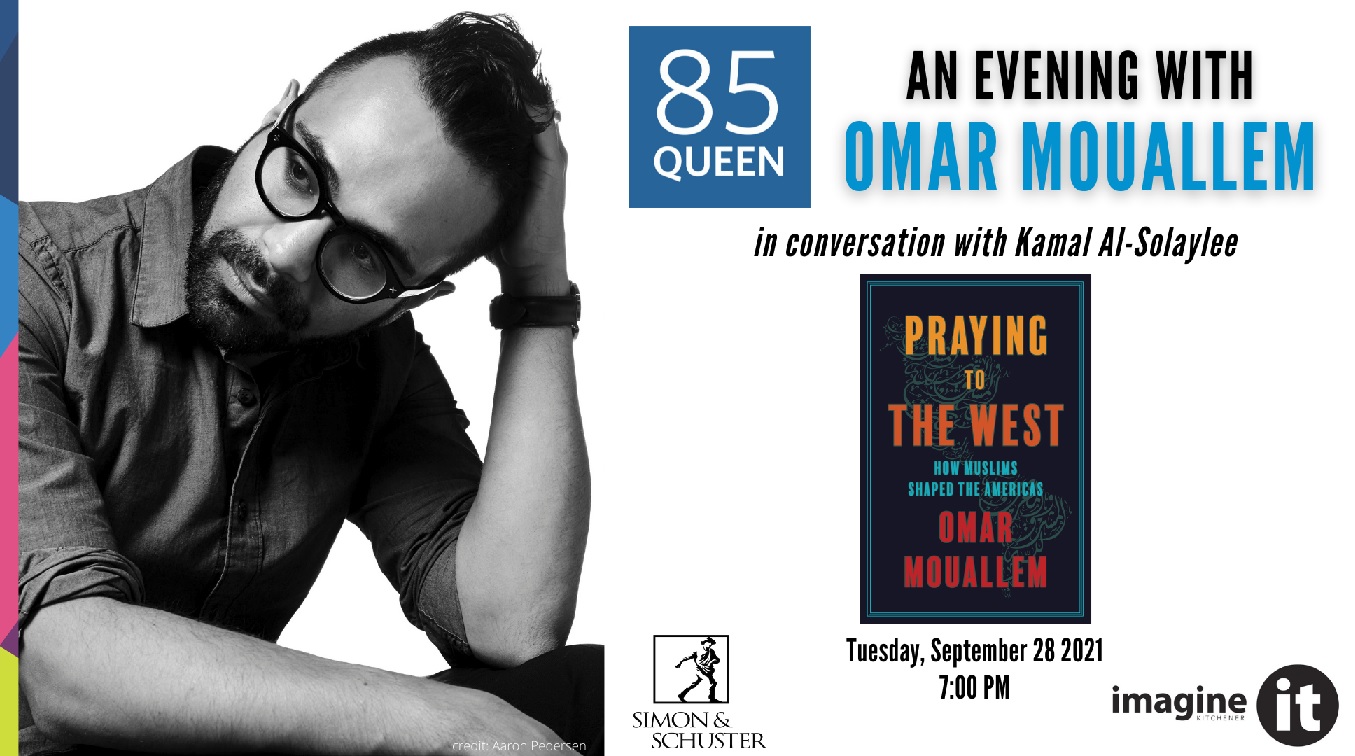 This is a FREE online talk offered via Zoom Webinar. Please register here.
Journalist Omar Mouallem travels to thirteen remarkable mosques and discovers the surprising history of their communities. But what he finds also challenges his own long-held personal beliefs, and even his sense of identity.

“Until recently, Muslim identity was imposed on me. But I feel different about my religious heritage in the era of ISIS and Trumpism, Rohingya and Uyghur genocides, ethnonationalism and misinformation. I’m compelled to reclaim the thing that makes me a target. I’ve begun to examine Islam closely with an eye for how it has shaped my values, politics, and connection to my roots. No doubt, Islam has a place within me. But do I have a place within it?”

Omar Mouallem grew up in a Muslim household, but always questioned the role of Islam in his life. As an adult, he used his voice to criticize what he saw as the harms of organized religion. But none of that changed the way others saw him. Now, as a father, he fears the challenges his children will no doubt face as Western nations become increasingly nativist and hostile toward their heritage.

In Praying to the West, Mouallem explores the unknown history of Islam across the Americas, traveling to thirteen unique mosques in search of an answer to how this religion has survived and thrived so far from the place of its origin. From California to Quebec, and from Brazil to Canada’s icy north, he meets the members of fascinating communities, all of whom provide different perspectives on what it means to be Muslim. Along this journey he comes to understand that Islam has played a fascinating role in how the Americas were shaped—from industrialization to the changing winds of politics. And he also discovers that there may be a place for Islam in his own life, particularly as a father, even if he will never be a true believer.

Original, insightful, and beautifully told, Praying to the West reveals a secret history of home and the struggle for belonging taking place in towns and cities across the Americas, and points to a better, more inclusive future for everyone.
Omar Mouallem is an award-winning writer and filmmaker. His journalism has appeared in The Guardian, The New Yorker, Rolling Stone, Maclean’s, WIRED, and more. He coauthored the national bestseller Inside the Inferno: A Firefighter’s Story of the Brotherhood that Saved Fort McMurray, and codirected Digging in the Dirt, a documentary about mental health in the Alberta oil patch. In 2020, he founded Pandemic University School of Writing. He lives in Edmonton, Alberta, with his family. Follow him on Twitter @OmarMouallem and find him at OmarMouallem.com. Visit PrayingtotheWest.com for more information.
Dr. Kamal Al-Solaylee, Director of School of Journalism, Writing, and Media, UBC  was previously an associate professor at the School of Journalism at Ryerson University, a theatre critic at the Globe and Mail. He has written features and reviews for the Toronto Star, National Post, The Walrus, Toronto Life, Chatelaine, Quill & Quire, Canadian Notes & Queries, Literary Review of Canada and ELLE Canada.
His bestselling memoir Intolerable: A Memoir of Extremes won the Toronto Book Award and was a finalist for the Hilary Weston Writers’ Trust Prize for Nonfiction, the Lambda Literary Award, and Canada Reads. Al-Solaylee holds a PhD in English from the University of Nottingham. His new book, Brown, has been hailed as "brilliant" by The Walrus magazine, "essential reading" by the Globe and Mail, and was a finalist for the 2016 Governor General's Award for Non-Fiction He holds a PhD in English Literature from Nottingham University.