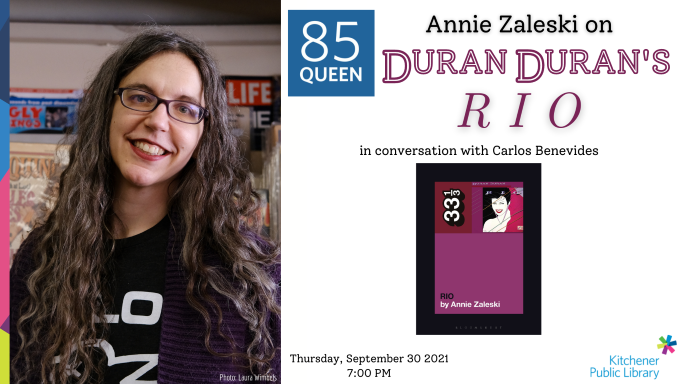 This is an online event hosted via Zoom Webinar. Please register here
Moderated by Carlos Benevides.Calling all music fans! Author and journalist Annie Zaleski joins us to discuss her new book on Duran Duran's seminal 1982 album RIO.In the '80s, the Birmingham, England, band Duran Duran became closely associated with new wave, an idiosyncratic genre that dominated the decade's music and culture. No album represented this rip-it-up-and-start-again movement better than the act's breakthrough 1982 LP, Rio. Via extensive new interviews with band members and other figures who helped Rio succeed, this book explores how and why Rio became a landmark pop-rock album, and examines how the LP was both a musical inspiration-and a reflection of a musical, cultural, and technology zeitgeist.
Annie Zaleski is an award-winning freelance journalist, editor, and critic based in Cleveland, Ohio. Previously, she was on staff at the Riverfront Times and Alternative Press. Her profiles, interviews, and criticism have appeared in publications such as Rolling Stone, NPR Music, The Guardian, Salon, Time, Billboard, The A.V. Club, Vulture, The Los Angeles Times, Stereogum, Cleveland Plain Dealer, and Las Vegas Weekly. She also writes liner notes, including for the 2016 reissue of R.E.M.'s Out of Time.
Carlos Benevides started his radio career in 1998 at the legendary 102.1 The Edge in Toronto, moved to the lovely, scenic, beautiful Tri-Cities in 2003 to work at DAVE FM on the Big Afternoon Radio Show, then to mornings on the Beat Breakfast on 91.5 The Beat in 2010.  In 2019 he made the transition to teaching and is now a Broadcast Radio Professor helping prepare the next generation of broadcasters and podcasters at Conestoga College.  You can listen to Carlos Saturday mornings from 8am to 2pm on CHYM 96.7.
RIO is part of the 33 1/3 series of short books about popular music, each focusing on an iconic individual album that occupies a specific place in music history. Many of the great titles from the 33 1/3 series are now available at KPL!