Success! - You have been subscribed to Computers and Technology events at Virtual Event.
View Calendar 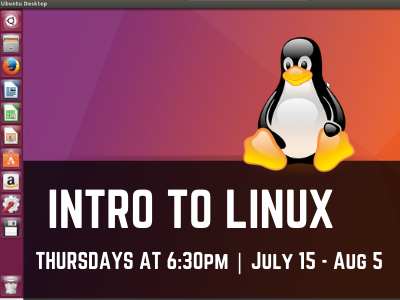 Do you think the internet (or "the cloud") is run on Windows computers or Macs?

Trick question, the answer is neither.  The internet runs on Linux.  Linux is 'open-source' meaning it is completely free and all of the code that makes Linux tick is visible to everyone, unlike Windows or Mac).  As an operating system, it has all strengths of Windows and Mac with none of their weaknesses.  It does have a different weakness though, it has replaced being 'user-friendly' with increased functionality, security, and speed.  So... you are going to want to take a course on how to use this miracle of technology.  And lucky you, here is that course.
Class Dates:
Tuesdays at 6:30pm-8pm
July 15, 22, 29
Aug 5
This 4-week course will be an introduction to Linux.
We will cover how to try it (WITHOUT uninstalling your current operating system!)
We will learn how to navigate around in the Linux "Command Line".
We will learn how to make a Linux Bootable USB so we can take Linux everywhere.

An everyday use for Linux (to try AFTER the course, not before!) would be to revive an old laptop that has been collecting dust in a closet.  It was there because it was too slow to boot into Windows anymore.  Linux fixes this.  If you plug in a Linux USB stick (yes, Linux is so small it can fit on a small USB stick), you can either load or install the Linux operating system even before Windows boots up!  Now this laptop should boot up in a few seconds instead of a few minutes, and will have extra capabilities that it never had before!