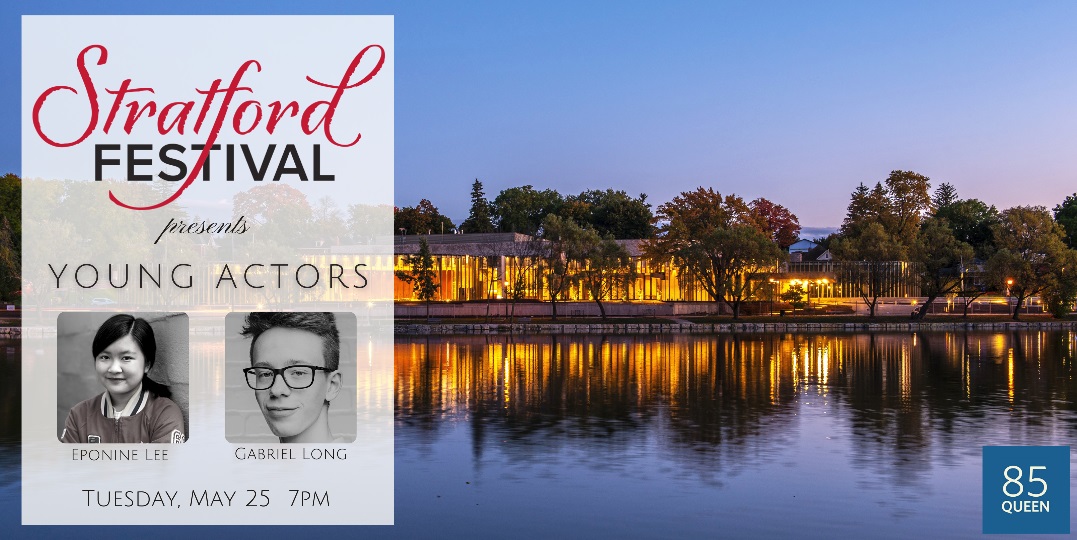 Join artists Eponine Lee and Gabriel Long to learn more about what it means to be a young actor.

Gain insight into the particular joys and challenges of what it means to create, rehearse and perform onstage at the Stratford Festival and elsewhere for young actors like Eponine and Gabe.
Tonight's talk will be hosted by Lois Adamson, the Stratford Festival’s Tim and Frances Price Director of Education, and will culminate in a live Q&A so you can ask your questions.
BIOS:
Eponine Lee was born and raised in Toronto. She is a grade 8 student at a local Toronto Elementary school. She loves to read and hopes to one day be a writer, actor and a WNBA Basketball Player. Her theatre and film credits include: The Shivers (digital reading, Firecracker Department); We Will Be: Rising as a Community (SummerWorks Performance Festival); The Girl, Her Mum and The Raccoon With No Name (Young People’s Theatre); One Flea Spare (digital reading, CanadaPerforms); A Winter’s Tale (Shakespeare in the Ruff); The Full Light of Day (Electric Company Theatre/Luminato Festival); A Christmas Carol (Soulpepper Theatre Company); Queen of the Morning Calm (QOTMC Inc.); Little Wonder (workshop; UnSpun Theatre); Child-ish (workshop; The Child-ish Collective); Tails from the City (Common Boots Theatre Company); carried away on the crest of a wave (Tarragon Theatre). Eponine was recently awarded Best Breakout Performance at the 2020 Canadian Film Fest for Queen of the Morning Calm.

Gabriel Long enjoys rock climbing, making digital art, and is hoping to go into engineering while still continuing his passion for the arts!

Gabriel's Stratford credits include: Understudy for Jem and Dill in To Kill a Mockingbird (2018) Moth in Love’s Labour’s Lost (2015), Sentinel in A Midsummer Night’s Dream (2014), Town Boy in The Merchant of Venice (2013). Elsewhere: Member of KW Glee Show Choir (2015-2020), Christopher in Curious Incident of the Dog in the Nighttime, Nick in A Thousand Clowns (Lost and Found Theatre), Who in Seussical (KWMP), Child in Variation (Unhinged Festival), various (Growing in the Arts). Awards: Acting scholarship, Growing in the Arts School of Dramatic and Cinema Arts. Honours, Royal Conservatory of Music Grade 8 Piano and Advanced Rudiments. Et cetera:

The Stratford Festival is transforming, for this summer, into an outdoor festival offering a season of six plays and five cabarets reflecting on the theme of Metamorphosis, with performances held under beautiful canopies that will hark back to the Festival’s founding under a tent back in 1953.

For details on the season and how to purchase tickets, visit 2021 Season
Recording notice: This event will be recorded for later viewing on KPL's YouTube Channel. Only the presenters' video and audio feeds are captured.