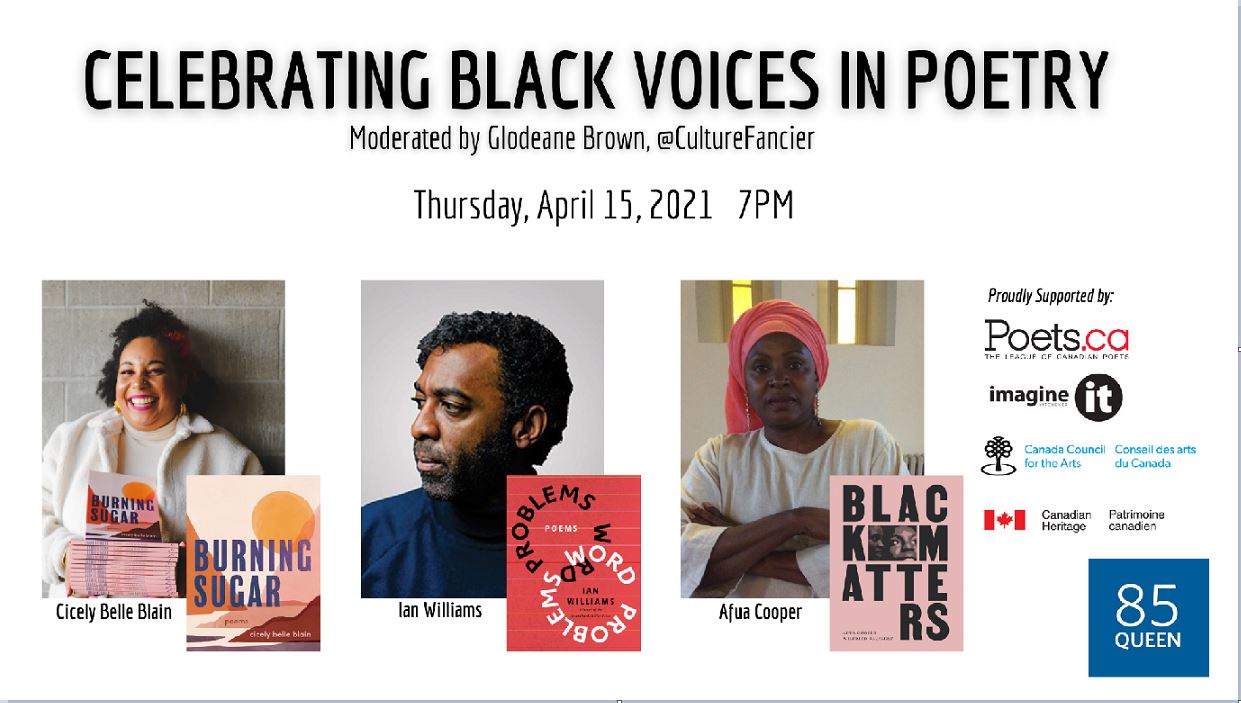 This is an online event hosted via Zoom Webinar. Please register here

The League of Canadian Poets invites you to celebrate the 23nd National Poetry Month this April 2021 with the theme of resilience.

What does it mean to be resilient? We meet resilience in every corner we’ve been backed into, every hardship that we endure. Resilience is geographical, spiritual, historical. It’s the fight against climate change, the inner battle with mental health, the outcry for human rights and an end to systemic racism. Resilience is the backbone of generations of trauma, the silence at the dinner table, the bow to culture’s violin. Resilience is the courage to start each day anew. This NPM 2021, we celebrate, reflect on and respect the resilience that has made us who we are.

Join us to celebrate Black voices in poetry. This will be an evening of poetry readings and discussion with three Canadian poets around the theme of resiliency in their latest books.

Cicely Belle Blain is a Black/mixed, queer femme from London now living on the lands of the Musqueam, Squamish and Tsleil-Waututh peoples.

At the heart of their work, Cicely Belle harnesses their passion for justice, liberation and meaningful change via transformative education, always with laughter, and fearlessly in the face of resistance. They are noted for founding Black Lives Matter Vancouver and subsequently being listed as one of Vancouver magazine's 50 most powerful people, BCBusiness magazine's 30 under 30, and the CBC's 150 Black women and non-binary people making change across Canada. They are now the CEO of Cicely Blain Consulting, a social justice-informed diversity and inclusion consulting company with over 100 clients across North America, Europe, Asia and Africa.

Dr. Afua Cooper is a tenured, full-time professor at Dalhousie University’s Department of Sociology and Social Anthropology with cross-appointments in the Department of History and Gender and Women Studies.

A celebrated poet, Afua was recently installed as Halifax’s (Nova Scotia, Canada) 7th Poet Laureate.  She is the author of five books of poetry, including the critically acclaimed Copper Woman and Other Poems. She has also recorded two poetry CDs. Her poetry has a strong sense of memory, history, place, and spirituality. Further, Afua has published two historical novels, which have garnered Canadian and American awards. Her work in the creative arts has been recognized with the Premier of Ontario Award for Excellence in the Arts, a Governor General’s Award nomination, and internationally with the Beacon of Freedom Award (recently awarded for her book My Name is Phillis Wheatley). A founder of the Canadian Dub poetry movement, Afua Cooper was instrumental in organizing between 2004 and 2009, three international dub poetry festivals.

Ian Williams’s latest book is Word Problems, a poetry collection that considers the ethical and political issues of our time as math and grammar problems. His novel, Reproduction, won of the 2019 Scotiabank Giller Prize. It was  published in Canada, the US, and the UK, and translated into Italian.
His poetry collection, Personals, was shortlisted for the Griffin Poetry Prize and the Robert Kroetsch Poetry Book Award. His short story collection, Not Anyone’s Anything, won the Danuta Gleed Literary Award for the best first collection of short fiction in Canada. His first book, You Know Who You Are, was a finalist for the ReLit Poetry Prize. CBC named him as one of ten Canadian writers to watch. He is a trustee for the Griffin Poetry Prize.
Williams holds a Ph.D. in English from the University of Toronto and is currently a professor of poetry at the University of British Columbia. He was the 2014-2015 Canadian Writer-in-Residence for the University of Calgary’s Distinguished Writers Program.

Glodeane Brown, is a former interior design consultant with a passion for all things relating to arts and culture. Her passion led her to Humber College where she completed post graduate studies in Arts Administration & Cultural Management. She is now an arts management professional and founder of Culture Fancier. In 2020 she received an Arts Awards Waterloo Region award for her contribution to the local arts community.
The aim of Culture Fancier is to educate, entertain, and inspire. You'll find posts about art, art shows and events, as well as interviews with artists and other creative, inspiring people.

Kitchener Public Library would like to acknowledge the funding support of the League of Canadian Poets, Canada Council for the Arts, Canadian Heritage Foundation and ImagineIt Kitchener.