85 Queen: An Evening with Jesse Thistle 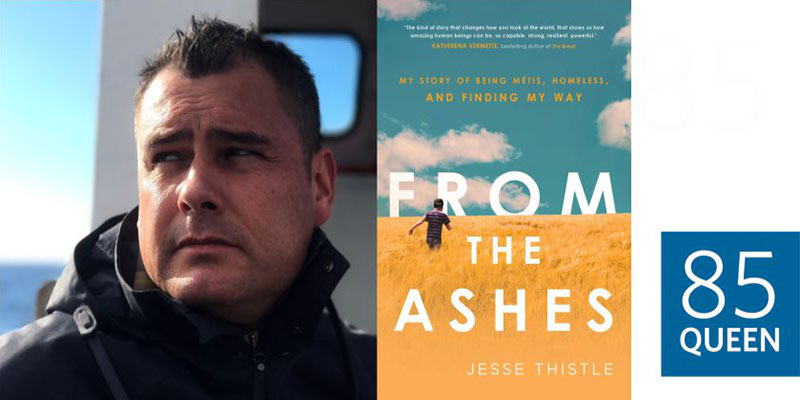 As our events are free, it is our policy to overbook. In case of a full program, your reservation may not guarantee admission. We recommend that you arrive early.

In conversation with Professor Susan Roy, Associate Professor and Associate Chair (Graduate) University of Waterloo In this extraordinary and inspiring debut memoir, Jesse Thistle, once a high school dropout and now a rising Indigenous scholar, chronicles his life on the streets and how he overcame trauma and addiction to discover the truth about who he is.If I can just make it to the next minute...then I might have a chance to live; I might have a chance to be something more than just a struggling crackhead. From the Ashes is a remarkable memoir about hope and resilience, and a revelatory look into the life of a Métis-Cree man who refused to give up. Abandoned by his parents as a toddler, Jesse Thistle briefly found himself in the foster-care system with his two brothers, cut off from all they had known. Eventually the children landed in the home of their paternal grandparents, whose tough-love attitudes quickly resulted in conflicts. Throughout it all, the ghost of Jesse’s drug-addicted father haunted the halls of the house and the memories of every family member. Struggling with all that had happened, Jesse succumbed to a self-destructive cycle of drug and alcohol addiction and petty crime, spending more than a decade on and off the streets, often homeless. Finally, he realized he would die unless he turned his life around. In this heart-warming and heart-wrenching memoir, Jesse Thistle writes honestly and fearlessly about his painful past, the abuse he endured, and how he uncovered the truth about his parents. Through sheer perseverance and education—and newfound love—he found his way back into the circle of his Indigenous culture and family. An eloquent exploration of the impact of prejudice and racism, From the Ashes is, in the end, about how love and support can help us find happiness despite the odds.

Jesse Thistle is Métis-Cree, from Prince Albert, Saskatchewan. He is an assistant professor in Métis Studies at York University in Toronto. He won a Governor General’s Academic Medal in 2016, and is a Pierre Elliot Trudeau Foundation Scholar and a Vanier Scholar. He lives in Toronto. Visit him on Twitter @MichifMan