85 Queen: Where Did the Universe Come From? 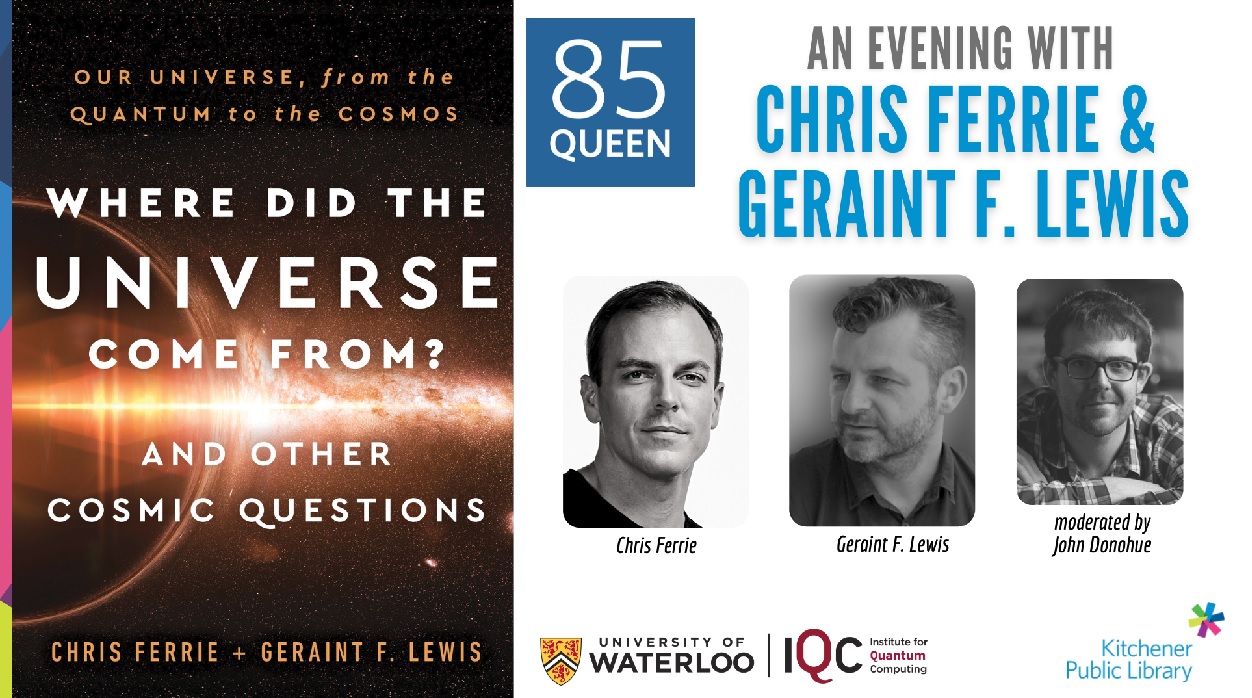 This is a FREE online talk offered via Zoom Webinar. Please register here.
Tonight's book launch co-authors, Chris and Geraint, will talk about the fascinating exploration of the vastness of the universe. This event is one of several celebrating Science Literacy Week.

Do you ever look up to the stars and wonder about what is out there?

Over the last few centuries, humans have successfully unraveled much of the language of the universe, exploring and defining formerly mysterious phenomena such as electricity, magnetism, and matter through the beauty of mathematics. But some secrets remain beyond our realm of understanding--and seemingly beyond the very laws and theories we have relied on to make sense of the universe we inhabit. It is clear that the quantum, the world of atoms and electrons, is entwined with the cosmos, a universe of trillions of stars and galaxies...but exactly how these two extremes of human understanding interact remains a mystery. Where Did the Universe Come From? And Other Cosmic Questions allows readers to eavesdrop on a conversation between award-winning physicists Chris Ferrie and Geraint F. Lewis as they examine the universe through the two unifying and yet often contradictory lenses of classical physics and quantum mechanics, tackling questions such as:

This book will have armchair physicists turning the pages until their biggest and smallest questions about the cosmos have been answered.

Chris Ferrie is an Associate Professor at the University of Technology Sydney and the Centre for Quantum Software and Information. His research interests include quantum learning and control. He obtained his PhD in Applied Mathematics from the Institute for Quantum Computing and University of Waterloo (Canada) in 2012. Chris’s passion for communicating science has led from the most esoteric topics of mathematical physics to more recently writing children’s books, such as Quantum Physics for Babies, and a whole collection of other titles that make science accessible even for the youngest children. His latest book – Where did the universe come from? And other cosmic questions – explores how the connection between the quantum and cosmos provides our understanding of the universe.

Born and raised in Old South Wales, Geraint F. Lewis is now professor of astrophysics at the Sydney Institute for Astronomy at the University of Sydney. His research focuses on cosmology, gravitational lensing and galactic cannibalism, all with the goal of unravelling the dark-side of the universe. He is the author of two popular books on cosmology – A Fortunate Universe: Life in a finely tuned cosmos and The Cosmic Revolutionary’s Handbook: Or how to beat the Big Bang – both authored with Luke Barnes. A new book – Where did the universe come from? And other cosmic questions – written with Chris Ferrie, explores how the connection between the quantum and cosmos provides our understanding of the universe.

John Donohue is the Senior Manager of Scientific Outreach at the Institute for Quantum Computing, a research institute at the University of Waterloo. John develops educational materials and events for educators and students of all ages to learn about quantum mechanics and quantum information. He earned his PhD in Physics from the University of Waterloo in 2016 with a research speciality in quantum photonics, quantum information, and laser technologies.