85 Queen: For the Love of Letters with Janet Skeslien Charles and Genevieve Graham 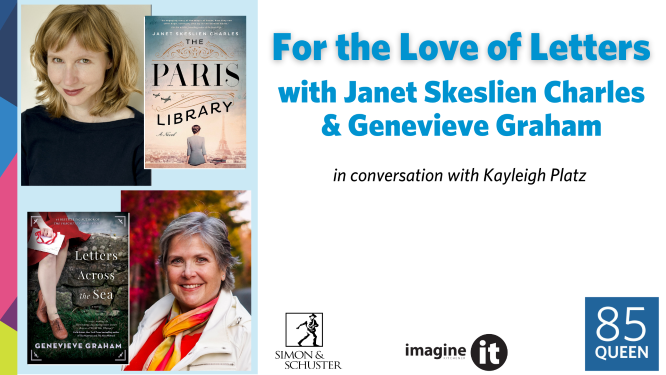 ***DUE TO A FAMILY EMERGENCY, THIS EVENT HAS BEEN POSTPONED***

We will announce a new date as soon as we can. Thank you for understanding.

Authors Janet Skeslien Charles and Genevieve Graham join us to discuss their new novels, The Paris Library and Letters Across the Sea.  Moderated by Kayleigh Platz
The Paris Library
Based on the true World War II story of the heroic librarians at the American Library in Paris, this is an unforgettable story of romance, friendship, family, and the power of literature to bring us together, perfect for fans of The Lilac Girls and The Paris Wife.

“The Paris Library is a refreshing novel that celebrates libraries as cradles of community, especially when we need them the most. It shows how literature can be a means of escape, a catalyst for human connection, and a moral center in grim times. A thoroughly enjoyable read, kind-hearted and brimming with delightful bookish allusions.”

-MATTHEW SULLIVAN, author of Midnight at the Bright Ideas Bookstore

Letters Across the Sea

Inspired by a little-known chapter of World War II history, a young Protestant girl and her Jewish neighbour are caught up in the terrible wave of hate sweeping the globe on the eve of war in this powerful love story that’s perfect for fans of The Guernsey Literary and Potato Peel Pie Society.

“Readers weary of European-centric World War II dramas will delight in Genevieve Graham’s Letters Across the Sea, which centers on the courage and tenacity of Canadian soldiers, veterans, and home-front fighters. A budding love affair between Irish aspiring-journalist Molly and Jewish medical student Max is derailed first by a shocking anti-Semitic riot, then by the winds of war which send Max to fight in the Pacific as Molly carves herself a niche as a reporter. A lost letter has the power to bring them back into each other’s lives, but at what cost? A tender, moving tale illuminating a fascinating lesser-known chapter of World War II history!” - KATE QUINN, New York Times bestselling author of The Huntress and The Alice Network

Genevieve Graham is the #1 bestselling author of The Forgotten Home Child, Tides of Honour, Promises to Keep, Come from Away, and At the Mountain’s Edge. She is passionate about breathing life back into Canadian history through tales of love and adventure. She lives near Halifax, Nova Scotia. Visit her at GenevieveGraham.com or on Twitter and Instagram @GenGrahamAuthor.

Janet Skeslien Charles is the award-winning author of Moonlight in Odessa, which was published in ten languages. Her shorter work has appeared in revues such as Slice and Montana Noir. Janet first became interested in the incredible true story of the librarians who stood up to the Nazi “Book Protector” when she worked as the program’s manager at the American Library in Paris. Her novel The Paris Library will be published in thirty countries. She divides her time between Montana and Paris. Visit her at JSkeslienCharles.com or connect with her on Twitter @SkeslienCharles.

Kayleigh Platz is a Kitchener-based writer. Growing up and working in the Waterloo Region technology and academic sectors, she likes to examine the ways our complex would impacts everyday life.

She holds a master’s degree in anthropology, and has defined her career around digital cultures, community building and brand storytelling.

Kayleigh is an avid reader who is passionate about library advocacy. In her spare time, you can find her supporting the writing community and moderating discussion with authors.

Recording notice: This event will be recorded for later viewing on KPL's YouTube Channel. Only the presenters' video and audio feeds are captured.