Success! - You have been subscribed to 85 Queen events at Virtual Event.
View Calendar

What is Land Back? 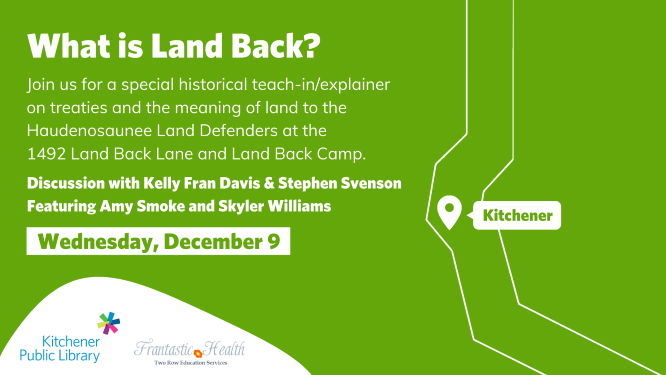 This event will be live-streamed on YouTube. You can watch by clicking here
Join us for a special historical teach-in/explainer on history of treaties and the meaning of land to Haudenosaunee Land Defenders at 1492 Land Back Lane and Land Back Camp.  Leading this discussion is Kelly Fran Davis and Stephen Svenson. They are joined by Skyler Williams, the current spokesperson for 1492 Land Back Lane and Amy Smoke, a co-founder of the Land Back Camp initiative in Waterloo region.
Kelly Fran Davis is Haudenosaunee from the Grand River territory. As an Indigenous Consultant, some highlights of the services she offers include Professional Development Facilitator; Curriculum and Program Development; Advisory Support; Speaker and Performer. Kelly Fran is now a Haudenosaunee Researcher. Creating Our Way Forward - Recommendations for Improving Niagara Region Public Health & Emergency Services’ Indigenous Engagement was her first project. For the past four years, she has been a part-time faculty of education member at Wilfrid Laurier University. She instructs Indigenous Context in Education for 2nd-year Teacher Education Candidates. Kelly Fran Davis is a leader in change, guided by the Calls to Action of Canada's Truth & Reconciliation Commission.
Stephen Svenson Doc Svenson or “Sven,” is a precarious academic worker and community organizer in Kitchener-Waterloo active on issues of climate change, food justice, and Indigenous sovereignty. He is a settler who comes from the traditional territory of the Splatsin (Spla-jeen) people in the North Okanagan where growing up as a fisher, farmer, and forager he gained a deep appreciation for the land.
Currently, he teaches, among other subjects, sociology of education, sociology of youth, environmental sociology and research methods at Wilfrid Laurier University where he is working on the problem of how to decolonize education in an institutional setting.
Amy Smoke is Mohawk Nation, Turtle Clan from the Six Nations of the Grand River. Amy is a Two Spirit IndigiQueer parent, public speaker, and community organizer. They have graduated from Conestoga College General Arts & Science, University of Waterloo with a BA and BSW, as well as Wilfrid Laurier University with a Masters in Indigenous Social Work. Amy has won several awards for Social Justice and Leadership, and is the co-founder and co-organizer of O:se Kenhionhata:tie Land Back Camp
Skyler Williams is a husband, father, Haudenosaunee Land Defender, the current spokesperson for 1492 Land Back Lane, a decorated boxer, and a 3rd generation Ironworker. Skyler is a Haudenosaunee Land Defender because he is a father, and it is important to him that his children and further generations do not have to continue to fight to stop the development of our Haudenosaunee territory. He is over-the-top thankful for his amazing wife that stands by his side and inspires all of their daughters to be proud Haudenosaunee women!
Skyler has been a land defender for the better part of his life, he supported Kahnastaton - The Protected Place, Camp Ipperwash - where Dudley George was killed by the OPP, Standing Rock Indian Reservation - Dakota Access Pipeline Resilience, Tyendinaga’s protest effort to put pressure on the federal government to look into missing and murdered Indigenous women and more recently Tyendinaga’s rail blockade in support to our relatives on the west coast - the Wet’suwet’en, which Skyler has also supported directly. He is a Mohawk Wolf clan warrior from the Six Nations of the Grand River territory.