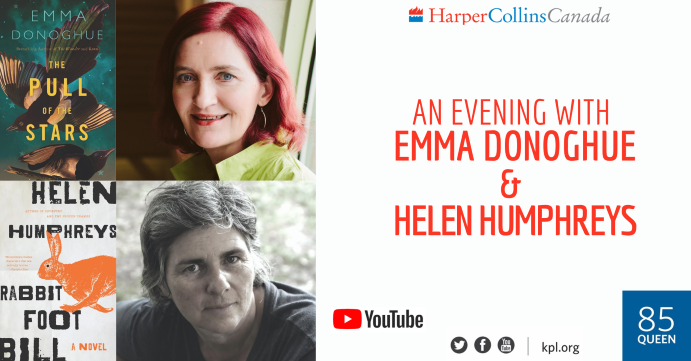 This event will be live-streamed on our YouTube channel. No registration required.
CLICK HERE to view the live-stream
Join authors Emma Donoghue and Helen Humphreys as they discuss their new novels, The Pull of the Stars and Rabbit Foot Bill.
THE PULL OF THE STARS
Dublin, 1918: three days in a maternity ward at the height of the Great Flu. A small world of work, risk, death and unlooked-for love, by the bestselling author of The Wonder and ROOM.
In an Ireland doubly ravaged by war and disease, Nurse Julia Power works at an understaffed hospital in the city center, where expectant mothers who have come down with the terrible new Flu are quarantined together. Into Julia’s regimented world step two outsiders—Doctor Kathleen Lynn, on the run from the police, and a young volunteer helper, Bridie Sweeney.
In the darkness and intensity of this tiny ward, over three days, these women change each other’s lives in unexpected ways. They lose patients to this baffling pandemic, but they also shepherd new life into a fearful world. With tireless tenderness and humanity, carers and mothers alike somehow do their impossible work.
RABBIT FOOT BILL
A lonely boy in a prairie town befriends a tramp in 1947 and then witnesses a shocking murder. Based on a true story.
Canwood, Saskatchewan, 1947. Leonard Flint, a lonely boy in a small farming town befriends the local tramp, a man known as Rabbit Foot Bill. Bill doesn’t talk much, but he allows Leonard to accompany him as he sets rabbit snares and to visit his small, secluded dwelling.
Being with Bill is everything to young Leonard—an escape from school, bullies and a hard father. So his shock is absolute when he witnesses Bill commit a sudden violent act and loses him to prison.
Fifteen years on, as a newly graduated doctor of psychiatry, Leonard arrives at the Weyburn Mental Hospital, both excited and intimidated by the massive institution known for its experimental LSD trials. To Leonard’s great surprise, at the Weyburn he is reunited with Bill and soon becomes fixated on discovering what happened on that fateful day in 1947.
*This event will be live-captioned for the hearing impaired*