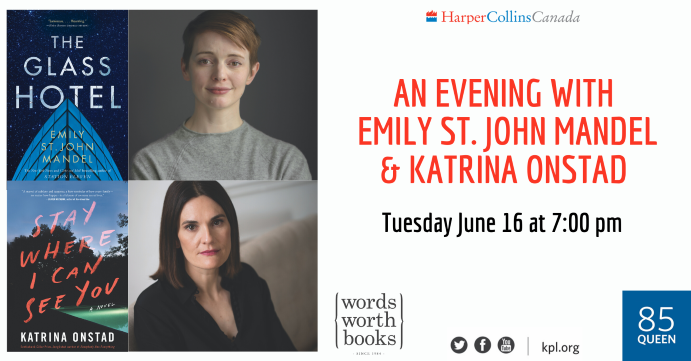 Space is limited - CLICK HERE to register
Moderated by David Worsley, co-owner of Wordsworth Books.
Please join us online for a discussion with best-selling authors Emily St. John Mandel and Katrina Onstad about their latest novels The Glass Hotel and Stay Where I Can See You, respectively.
THE GLASS HOTEL  by Emily St. John Mandel
#1 national bestseller
New York Times bestseller
From the award-winning author of Station Eleven, a captivating novel of money, beauty, white-collar crime, ghosts and moral compromise in which a woman disappears from a container ship off the coast of Mauritania and a massive Ponzi scheme implodes in New York, dragging countless fortunes with it.
Vincent is a bartender at the Hotel Caiette, a five-star glass-and-cedar palace on the northernmost tip of Vancouver Island. New York financier Jonathan Alkaitis owns the hotel. When he passes Vincent his card with a tip, it’s the beginning of their life together. That same day, a hooded figure scrawls a note on the windowed wall of the hotel: “Why don’t you swallow broken glass.” Leon Prevant, a shipping executive for a company called Neptune-Avramidis, sees the note from the hotel bar and is shaken to his core. Thirteen years later, Vincent mysteriously disappears from the deck of a Neptune-Avramidis ship.
Weaving together the lives of these characters, The Glass Hotel moves between the ship, the skyscrapers of Manhattan and the wilderness of remote British Columbia, painting a breathtaking picture of greed and guilt, fantasy and delusion, art and the ghosts of our pasts.
STAY WHERE I CAN SEE YOU by Katrina Onstad
In a family, is anything forgivable?
A penetrating new novel from the bestselling, Scotiabank Giller Prize-longlisted author of Everybody Has Everything
The Kaplan family has just won 10 million dollars in the lottery. But haven’t they always been lucky? Gwen thought so. She’s carefully curated a perfect suburban existence with a loving husband and two children. For over a decade, she’s been a stay-at-home mom, devoted to giving her kids the quiet, protected adolescence she didn’t have. But the surprise windfall suddenly upends the family, allowing them all to dream a little bigger and catapulting them back to the city that Gwen fled years ago.
As the Kaplans navigate the notoriety that the lottery brings and try to adjust to their new lives in the upper class—Seth launches a dubious start-up, Maddie falls headfirst in love at her elite prep school—a tightly held secret is unlocked. Along with the truth come long-buried memories from Gwen’s troubled youth, forcing her to confront her painful past and threatening to unravel the incredibly tight bond between her and Maddie. Her meticulously constructed identity as the good wife and mother begins to crack. And when their changed circumstances place her family under threat, Gwen must wake up from her domestic slumber.
EMILY ST. JOHN MANDEL is the author of four novels, most recently Station Eleven, which was a finalist for a National Book Award and the PEN/Faulkner Award; won the 2015 Arthur C. Clarke Award, the Toronto Book Award and the Morning News Tournament of Books; and has been translated into thirty-one languages. A previous novel, The Singer’s Gun, was the 2014 winner of the Prix Mystère de la Critique in France. Her short fiction and essays have been anthologized in numerous collections, including The Best American Mystery Stories 2013. She is a staff writer for The Millions. She lives in New York City with her husband and daughter.
KATRINA ONSTAD is a multiple award–winning journalist whose work has appeared in the Globe and Mail, Chatelaine, the New York Times Magazine, the Guardian and Elle. Her critically lauded novels include How Happy to Be and Everybody Has Everything, which was longlisted for the Scotiabank Giller Prize and shortlisted for the Toronto Book Award. Onstad lives in Toronto with her husband and two children.